Once on-board the Victoria Clipper, we were homeward bound.

After another brief, but comfortable night at Castle Whiteside Airbnb, we headed to Seattle’s rather grim-looking King Street Station to catch the Coast Starlight. 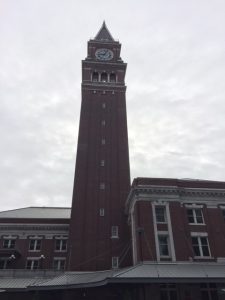 One of the Starlight’s many stops is Martinez, California – a town not far from Sonoma.  Yet, for reasons that shall forever remain obscure, our itinerary had us detraining in Sacramento and swapping to the Capitol Corridor, a commuter train that runs between Auburn and San Jose several times a day. 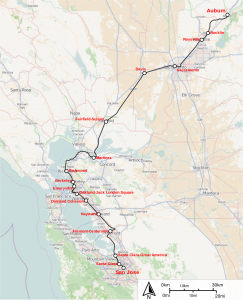 Martinez is a stop on the Capitol Corridor’s route as well, yet for equally mysterious reasons, we were booked through to the next station – Richmond.  Six of one, really; Martinez and Richmond are essentially equidistant from Sonoma.  Still, Martinez is the nicer depot, and why change trains when changing entails a two-hour layover and relies on the Starlight somehow and miraculously staying more or less on-schedule all the way down the coast?  Given Amtrak’s “track” record (oy), our chances of making that connection were exceedingly slim.

On paper, this final leg of our X-Country rail journey was exactly twenty-four hours:  depart Seattle, WA 9:35am Saturday – arrive Richmond, CA 9:35am Sunday.  Seattle being an origin/terminus of the Coast Starlight line, we did pull out of the station on time.  We were still on time an hour later, when we came to the Tacoma Narrows Bridge. 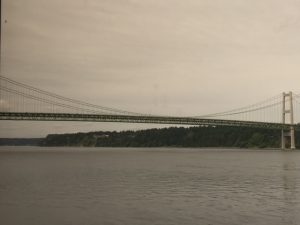 Doing double-duty as State Route 16 and the Scott Pierson Trail, these twin suspension bridges span Puget Sound, providing motorists, cyclers, skaters, and hikers safe passage across the strait along with inspiring views of the Olympic Peninsula and Mount Rainier.

“Safe” is the operative word here.  On 7 November 1940, just months after it was completed, the Tacoma Narrows Bridge (forever after known as “Galloping Gertie”) collapsed in 35-40 mph winds.  Click HERE for terrific period footage.

We pulled into Portland’s Union Station a half-hour early.  (!!!) 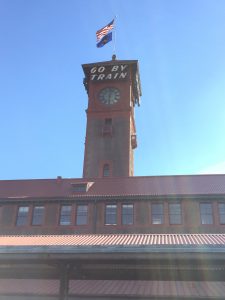 Famed for its parks, bridges, bike paths, microbreweries, and coffeehouses, eco-friendly Portland – Oregon’s largest city – is situated at the confluence of the Columbia and Willamette Rivers.  The train station sits on the west shore of the Willamette at the edge of the city’s Old Town Chinatown district. 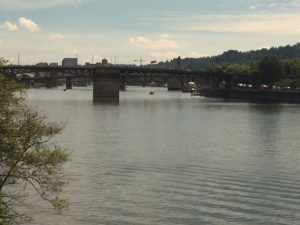 Amtrak time-tables park the Starlight in Portland for thirty minutes, to accommodate the scads of passengers getting off and getting on.  With bonus time added and a full hour to kill, Roy and I daringly ventured away from the station to see what we could see. 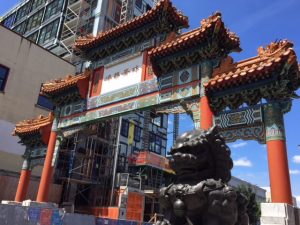 Victoria’s Chinatown, the oldest in Canada, has character, charm, and this magnificent “Gates of Harmonious Interest” for an entrance.  (Pic is from our trip in February 2015 (I took even worse photos back then).  That’s Roy on the left, in front of the lion.) 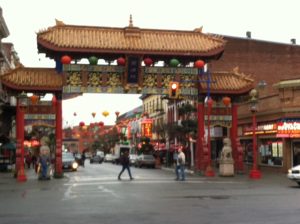 Vancouver’s Chinatown boasts great bakeries, dining hot spots, and the Dr. Sun Yat-Sen Classical Chinese Garden, the oldest “scholars” garden in North America and the first ever built outside of China.  Seattle’s Chinatown is the bustling heart of the city’s International District.  LA’s Chinatown sparkles and sprawls in typical SoCal fashion.  San Francisco’s Chinatown is in a class by itself; world-famous because it is undeniably the best.

Eschewing the classic, crowded, colorful, lantern-laced ambiance of its sister-cities’ Chinatowns, laid-back Portland’s Chinatown is . . . well, it’s pretty laid back.  Aside from the gate and a plethora of Asian restaurants, the most Pacific Rim-ish thing about it is the walled Lan Su Chinese Garden.  Intriguing, but we didn’t fork up the entrance fee, just peered through the wall-slits and foliage as we ambled past.

Legs nicely stretched after a relaxing 45-minute stroll, we returned to the station. 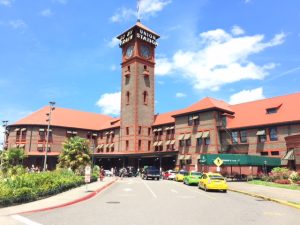 That green awning on the right leads to Wilf’s Restaurant and Bar.  A Union Station fixture for more than forty years, Wilf’s serves up American fare (steaks, seafood, liquor) and jazz to train travellers, Chinatown tourists, and Blazer fans heading to a game at the nearby Moda Center.  In typically Portland-esque style, Wilf’s is family-owned, a sustainable company, and its locally-sourced menu changes with the seasons.

Wilf’s was another Portland landmark we declined to patronize.  We weren’t looking for luncheon, solid or liquid.  Amtrak had our meals covered, and being wiser now in the ways of the Coast Starlight than when we had ridden it north (see Riding the Rails – A Chronicle, we were taking our meals in the Parlour Car, where yummier options prevailed.

As the number of people still waiting to be allowed onto the platform implied, the Starlight’s departure was delayed, and we had yet more time to kill.  No worries.  Portland Union Station isn’t a bad place to kill time.  One of the oldest continually-operated passenger rail depots in the country, it is a registered National Landmark. 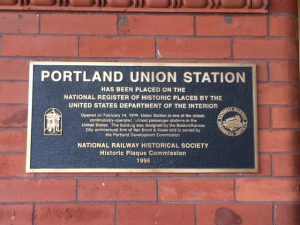 Next get-off-and-stretch stop was Eugene.  This mystery monument hiding just ‘round the corner from the platform won my heart. 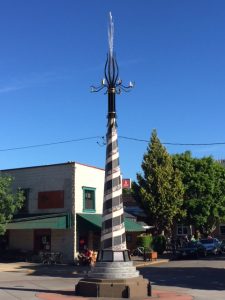 But seriously, what is it?  Who designed it?  When was it erected?  What is it called?  Is there a concept behind the geographical bottom ring, the time-line middle ring, and the friendly, multi-lingual top ring?  On what basis were these particular languages, events, and locations selected? 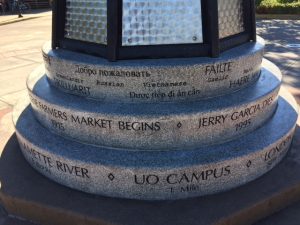 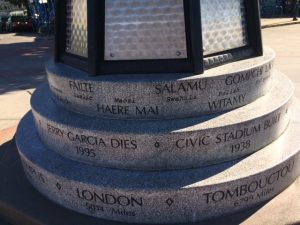 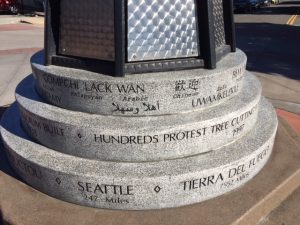 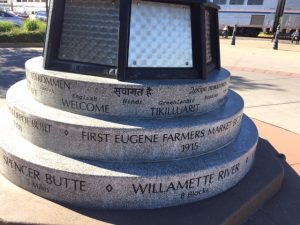 I gave up searching for answers when I discovered Amtrak maven and train-travel blogger extraordinaire Loco Steve had not managed to gather so much as a scrap of info on this commemorative pillar, despite having contacted two businesses whose doors literally open onto the tiny plaza in which it stands.

After Eugene and before sunset was the best part of the journey; three lingering-light hours rolling through the wilds of Oregon, gazing on wonders only intrepid hunters, backpackers, and Coast Starlight passengers have the privilege to behold.

First up, Lookout Point Lake near the edge of the Three Sisters Wilderness. 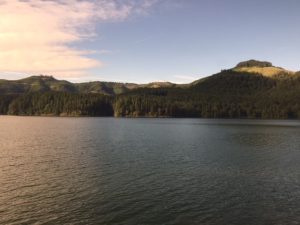 These next I shot in relatively quick succession from spots about midway between Hills Creek Lake, Waldo Lake, and Odell Lake in the Diamond Peak Wilderness. 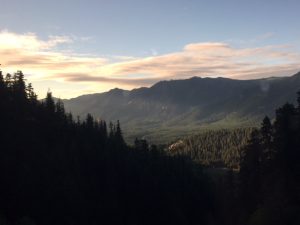 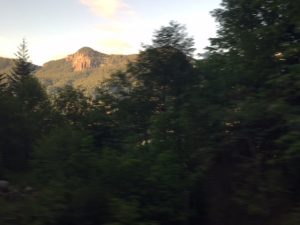 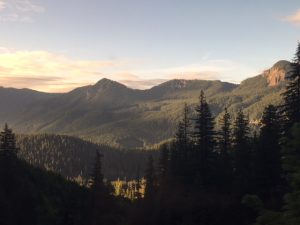 The curve of the track just before the Cascade Summit tunnel afforded me a glimpse of our train snaking through the mountains. 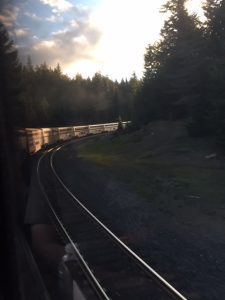 The Starlight’s route graciously spared us lengthy views of logging company clear-cuts and pine-beetle devastation.  The scenery was consistently stellar till the sun went down.

In the middle of the night, I was awakened by loud, squealing brakes and a jarring halt.  I figured we had been side-lined – abruptly side-lined – for a freight train.  I would have peered out the window to confirm, but being in the top bunk of a Superliner roomette, I had no window through which to peer.  Instead, I took advantage of the lull by willing myself back to sleep before the train got moving again.

Only it didn’t.  Get moving again.

While the Starlight’s silent immobility should have helped me sleep better, in fact, it made me restless.  Roy, too, apparently.  Just hours later, we were both irrevocably up for the day.  Roy went in search of breakfast and tidings.  I restored the roomette to seat-mode, opened the curtain, and – finally – looked out the window. 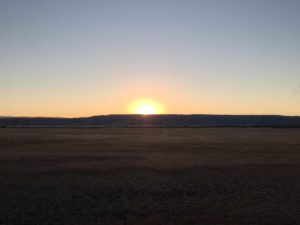 Weeks later, when I called up “file info” on this snapshot, Google Maps identified the image location as a spot not quite midway between a speck of a town called Los Molinos and a speck of a city called Chico.  (Chicoans may take umbrage, protesting that their fair city is the most populous in Butte County . . . which makes it the 83rd most populous in California.  I rest my case.)  Speck or not, point is, the Coast Starlight was a good 13-14 mi / 21-22.5 km from anything akin to an urban center, and had been since last night’s sudden stop.

Roy returned to our compartment with the following news items: 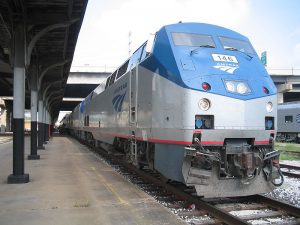 Acting on that last item, I headed to the Parlour Car for brekkers.  Once ensconced in a booth with my morning tea, I considered the other items.

I was relieved no one had been injured in the crash, as the helicopter revving in the field alongside us seemed to indicate otherwise.  On hearing the Starlight had hit a truck, I had immediately formed a mental image of an average guy in an old pickup that had unexpectedly died on the tracks at a railroad crossing.  Great that he’d escaped unscathed . . .

Only that wasn’t it at all.  The collision was no accident.  It was a deliberate, dangerous prank.

The Starlight hadn’t rammed into the truck at a crossing – a controlled junction of road and rail, where lights provide some visibility, trains are required by law to slow, and engineers are on the lookout for pedestrians and vehicles.  Check that sunrise pic again.  See any paved roads?  Dirt roads, fire roads?  Any street lamps?  Any structures?  Any anything?

The Starlight had rammed into that truck in the midst of open, isolated, uninhabited fields far from any roadways.  That’s why the ‘copter.  A passenger needed an emergency medical evac (nothing to do with the crash – purely coincidental), but our location was so remote, no ambulance could reach us.  Getting a truck across those fields and onto the tracks had taken forethought and industry.  The only conceivable reason to do such a thing?  Somebody and somebody’s friends thought it would be funny.

I get that life can be so ineffably boring that sabotaging a midnight train might seem like entertainment.  I have a bit of empathy . . . but no sympathy.  Running the Starlight full-throttle on a long, straight stretch of steel in an uninhabited area, the engineer couldn’t have had more than a glimpse of the truck before impact.  We were damn lucky we hadn’t derailed.

The dearth of road access made it hella hard for first responders and Amtrak officials to reach the crash site.  Getting the necessary equipment to the scene took even longer.  The Starlight’s crew did everything they could to make the extensive delay as pleasant as possible.  On the whole, everyone took the situation in stride and maintained good spirits, but I . . .

. . . I was a bit despondent.  I felt bad for Amtrak.  My beef with the Superliner roomette upper berth aside, all these weeks zigzagging across the country by rail had instilled in me a deep appreciation for the consistently thoughtful and creative Amtrak employees and respect for Amtrak’s sincerely good intentions.  Beleaguered, under-valued, poorly-supported, financially-strapped, and bullied by the freight companies, America’s one and only passenger train service is fighting for its very survival.  Laying a truck booby-trap for the Starlight was as low and cruel as sticking out a leg to trip a blind man . . . and might have proved far more lethal.

When at last the vehicle’s mangled remains were extricated from the undercarriage and the state of the plow fully assessed, it was decided the train could continue – slowly, and only as far as Sacramento.  There, Amtrak would have another Starlight waiting for the continuing passengers, and this old gal would go to the roundhouse for repairs.

At 9:19am – close to the time we should have been hitting Richmond – we were finally moving again. 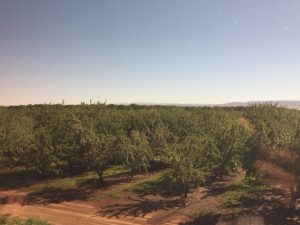 Perhaps it was my melancholy mood, but between Chico and Sacramento, the view out the window seemed a mono-thematic display of American poverty.  Tents cities and refuse lined the tracks. 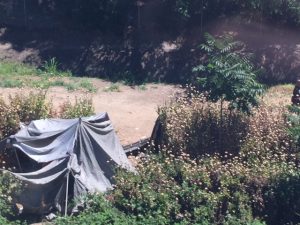 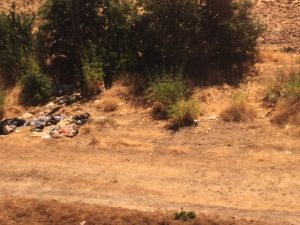 Obviously, we had missed our Sacramento connection, but it wasn’t too long before another Capitol Corridor came through.  Seeing how weary we were and knowing the story of the Starlight’s ordeal, our car attendant kindly ignored the fact that our assigned seats were upstairs, and let us collapse in the spacious “social/accessible seating” area downstairs.

We reached Richmond at last, late in the afternoon.  Zak, who had been our ride to the airport at the start of our journey, was waiting for us here at the end.  Waiting to take us home. 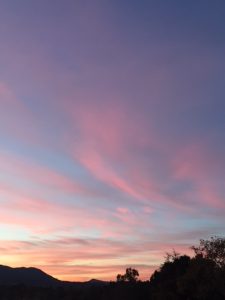 4 thoughts on “Riding the Rails – The Final Chapter”