Of course Mr. Tangerine Man flat refuses to admit Russia f*cked with our election.  Admitting they f*cked with it is tantamount to admitting he didn’t win it.  It’s admitting he is where he is because he invited a hostile foreign nation to pull a fast one on the whole US of A.  It’s copping to being a cheat, a loser, a liar, and a fraud who (occasionally) sits in the Oval Office because Putin knows a perfect pawn when he sees one. 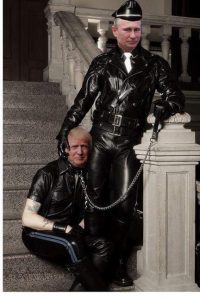 And btw, I’m calling BS on the whole “He’s spouting treason because they’ve got something on him” thing.  Everybody’s got something on him.  We’ve got him dead-to-rights calling Mexicans rapists, bragging about grabbing women by the pussy, inciting violence, mocking the disabled, defending homicidal Nazis, paying off porn stars, and dissing gold-star parents of a dead hero, to name just a few of his scandalous and/or impeachable offenses.  You think after “winning” the election despite (and, in some circles, because of) his racist rants, xenophobia, misogyny, incoherence, ignorance, and bald-faced lies – you think he’s denying his own intelligence agencies and giving the nod to the interrogation of American citizens by the СВР РФ (SVR RF – the new KGB) because he’s afraid the Russkies will embarrass him publicly?  Are you kidding?

He may not yet be able to incarcerate or kill anyone who speaks ill of him, but he knows damn well he can get away with just about anything else.  He’s aiming for the ranks of the dictators he so admires; those lesser (because they’re not white) oppressors Kim Jong Un and Duterte, and the tyrant he worships above all others, Vlad the Terrible.  The prevaricating pus-ball thinks (if you can call it “thinking”) he’s on a par with these monsters, that he can do whatever he wants and people will applaud him for it.  Or else.

Ok, he hasn’t quite sorted out all the kinks in the “or else” bit … but he’s working on it, making incremental genocidal progress, day by day.  And c’mon.  He’s got every reason to be cocky.  He has a fanatically loyal base.  His cabinet minions swallow his crap and regurgitate it as vile policies.  And instead of doing its job – instead of defending the Republic and protecting her citizens –  the Republican-held Congress is smugly throwing our nation under Agent Orange’s bus for personal gain and corporate profit.

The Cheeto-in-Chief isn’t capitulating to the Puppet-Master because he’s being blackmailed.  He’s got his lips locked on Vlad’s ass because he is genuinely delighted by all the nice things his ruthless Russian buddy has already done for him and giddy about the nice things Vova has promised to do for him in the future … though all that’s very hush-hush, isn’t it?  A two-hour private meeting, and Congress is ok not knowing what was said.  Neener-neener. 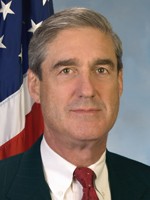 As it stands, Robert Mueller is the only person on this planet who could possibly challenge Pants-on-Fire’s absolute authority. That’s why it’s no-holds-barred, pull-out-all-the-stops time on undermining the Special Counsel investigation.  If that doesn’t work, though, the mendacious maggot ain’t worried.  He’s got friends.  Powerful friends, who know how to rig democratic elections, manipulate social media, and handle troublemakers.  Oh, and how to play an im-POTUS putz like a fiddle.

So if you’re waiting for the Commander of Cheese to acknowledge that that his old pal Putin meddled in our election and that the CIA, F.B.I., NSA, Office of the Director of National Intelligence, Justice Department, and Senate and House Intelligence Committees got it right, stop holding your breath.  And start learning Russian.

8 thoughts on “And Yellow Flows the Donald”